Bob in Brading To Talk About Housing 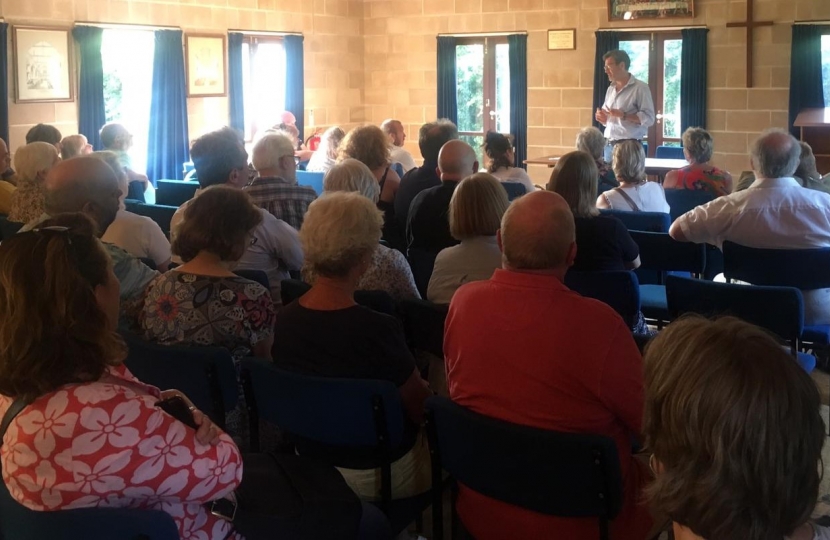 MP Bob Seely met with over 70 Brading residents on Friday (28) as part of a series of meetings across the Island to raise awareness of the Island Planning Strategy (Island Plan).

The plan allows for 65 homes on greenfield sites in around what is one of the Island’s oldest towns and home to historic Brading Roman Villa as well as sitting in within an Area of Outstanding Natural Beauty.

The houses are planned to be built on the land east of Hillway Road, off Morton Road near Brading Roman Villa, north of Quay Lane, Wrax Farm on New Road and The Builder’s Yard Yarbridge.

Bob said: “It was great to meet with residents in Brading to hear their views on the Island Plan and their ideas about how town and parish councils should be included in determining planning applications in their area.

“We cannot allow ‘boxy’ new builds to be built in one of the Island’s oldest towns. It is really important that any new homes reflect and take account of the town’s character and history.

“We need homes that benefit Island people – not mainland developers.

“There are too many houses in the Island Plan proposed to be built on greenfield sites. I am working with the IW Council to have the Island’s government-set housing target reduced. I am hearing the same thing wherever I attend meetings – the current housing levels in the Island planning strategy are unpopular, unnecessary and unsustainable.”

Linda Allen, Brading Town Council clerk said: “The meeting was packed and the council was pleased that Bob was able to take away a number of issues that were of concern to members and to residents.

Brian Tyndall, IW Councillor for Brading, St Helens and Bembridge said: “I attended the Brading meeting last Friday, and the previous meeting at Bembridge the week before. At both meetings Bob’s  enthusiasm for the future of the Island and all its residents was very clear and I’m sure he will make a powerful case in the coming weeks and months.”

Bob is encouraging residents to sign his petition and raise concerns with their local councillor. Bob is attending further meetings in Northwood, East Cowes, Ryde and Wroxall and welcomes invitations from other Island towns and villages wishing to discuss the proposals.

Bob’s survey and petition against the housing targets can be found here: http://islandvision.uk/islandplan/