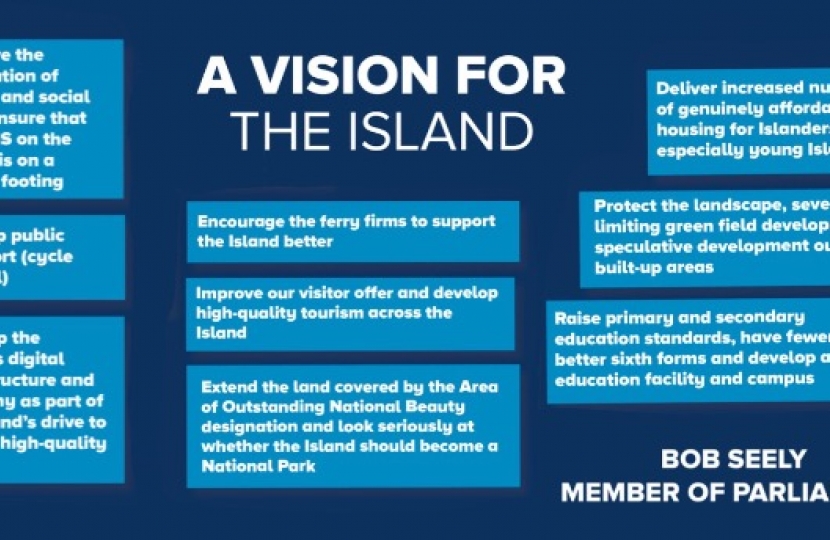 The document looks at key areas such as housing, transport, health and education to start a debate on how the Island can be protected and enhanced in the years to come.

It includes a campaign for the Island to receive a better government funding deal, which could mean an extra £6 million a year to pay for services.

“In this document, I offer a vision of what we should aim to achieve to make our Island even better,” said Bob. "My role is often to support others, to make connections in Westminster and Whitehall – and to bring people together.

“For many of these projects to succeed, I will need to work with others. Ultimately, it is what is achieved that matters, not who does it.”

The MP, who was elected in 2017, said he had spent a decade thinking about the issues the Island faces and added: “I am aware that by proposing new things, and a personal vision, I am opening myself to both scrutiny and potential criticism. As far as I know, I am the only MP to produce a detailed vision of what his or her constituency should look like after being elected.

“However, I would rather outline an ambitious plan for the Island and, working with others, see how much of it we can achieve, rather than be timid in our vision.”

The manifesto looks at attracting higher education to the Island, creating high-technology jobs in the digital industries by making use of some of the country’s best broadband speeds, extending the Island Line, creating more cycleways and making ferries company enter into a public service obligation.

Other areas include protecting the environment while developing homes the Island needs to build communities not just houses. It also says the Island needs a jobs agenda to attract high-quality jobs and also training for local people to be employed in them.

The manifesto proposes the Island needs to celebrate and show its cultural and artistic heritage to the world through partnerships with the Arts Council and London museums and galleries to attract visitors and create jobs.

The manifesto can be found at www.islandvision.uk