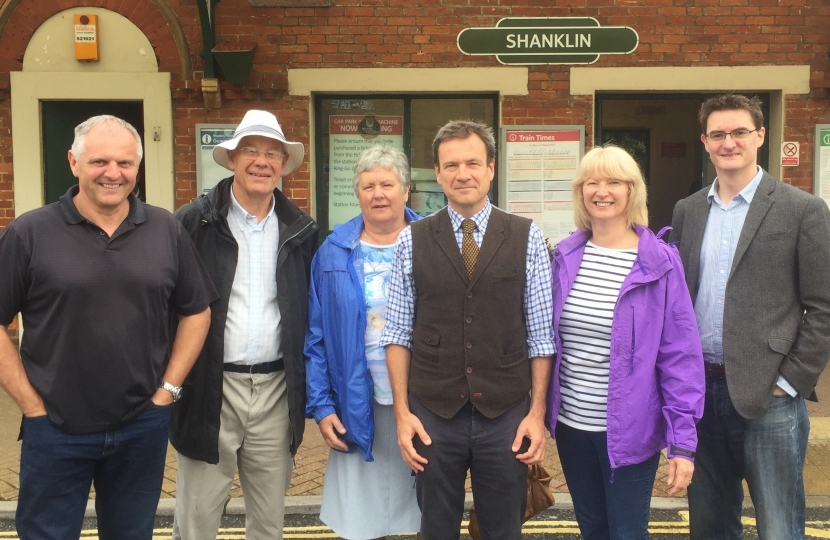 Bob Seely – the Conservative Parliamentary Candidate for the Isle of Wight – has pledged his support for the long-term future of the Island’s railway within the South Western Rail Franchise.

Bob recently travelled on Island Line to Shanklin to meet with staff, users and local councillors to hear their views about the need to retain and enhance the service.

The future of Island Line has been under the spotlight since 2015, when proposals were put forward by the Government that the route could be taken out of the franchise to become a “separate and self-sustaining business”. Thanks to the efforts of a local campaign group – Keep Island Line in the Franchise (KILF) – this proposal was subsequently dropped.

In 2015, Bob joined his fellow Isle of Wight Council members in voting for a resolution that Island Line should remain as a fully integral part of the South Western rail franchise for the entire duration of its post-2017 period.

With the next franchise having now been awarded to First Group MTR, Bob has reaffirmed his commitment to support its retention within this wider operation – and to work with the new franchisee if he is elected.

Speaking at Shanklin Railway Station — alongside Cllr Michael Beston, IW Council member for the area — Bob said: “The Island benefits from one of the most punctual railways in the country, with high levels of user satisfaction. It is a lifeline service for families, commuters, students and visitors.

“It is essential that Island Line is not only retained, but secures much-needed improvements. I welcome First Group MTR’s proposals to introduce more modern rolling stock, a new passing loop to allow for half-hourly services and an earlier service from here in Shanklin.

“For too long Island Line has faced uncertainty over its future. It’s now time for that uncertainty to end, and I salute the work of the KILF Campaign in tirelessly fighting to secure its place in the wider franchise. It is great news that leading KILF member Cllr Chris Quirk is now representing Shanklin South on the Isle of Wight Council, given the important role that the local authority has in relation to the future of Island Line.

“I am happy to make my position abundantly clear. If elected as the Island’s MP, I will be urging the Department for Transport to support First Group MTR’s plans for investment in the route, and to ensure its long-term inclusion within the wider franchise operation. This brings obvious benefits such as being part of the national rail network and providing through ticketing for joined-up journeys between anywhere on the mainland and all stops on the Island Line route. This must continue.

“But we also need to raise our aspirations higher. As well as retaining the existing route, we must explore the possibility of re-opening the line to Ventnor and what prospect there is of re-establishing other routes. I appreciate that there are practical and cost implications of such steps, but we are seeing former branch lines being re-opened elsewhere in the country. We must be ambitious in looking to do the same here on the Island.

“If elected I will be seeking the input of railway professionals and interested parties to help me take this forward.

“Railways on the Island are a proud part of our heritage. There is no reason we cannot make them an exciting part of the Island’s future as well. I look forward to exploring these options with both the DfT and my colleagues on the Isle of Wight Council, including Ian Ward, the Cabinet Member for Infrastructure and Transport.”

If elected, Bob will be meeting with representatives of First Group MTR ahead of their commencement of the new South Western Rail Franchise in August.