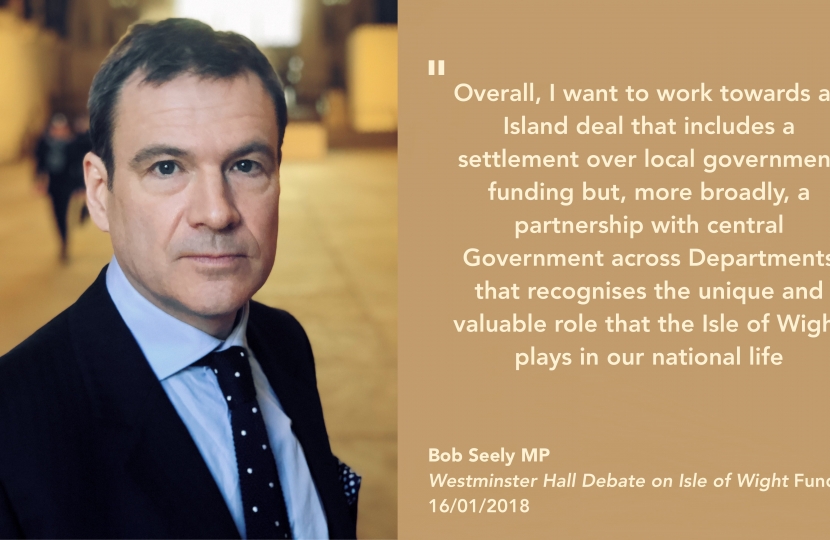 The Westminster Hall debate was called by Bob to put forward the case the Isle of Wight should receive an extra £6.4 million a year as the funding system “is prejudiced against the Island”, he told MPs and the public.

He explained to minister, Rishi Sunak, that the Government recognising the disadvantage would in no way set a precedent, but would help the Island and its unique status, especially as Scottish Islands receive extra cash.

Bob said a 2015 peer reviewed academic study by the University of Portsmouth calculated the extra cost of providing local government services on the Isle of Wight - 'the island factor' — was £6.4 million.

Added costs, the study found, came from the lack of spill over of public goods provision to and from neighbouring authorities; an island premium, which refers to the additional cost of conducting business on and with the Isle of Wight and “dislocation”—the costs associated with physical and perceived separation from the mainland - a common characteristic of all islands.

This meant there was little funding regard to the Island’s ageing population and their care needs and a lack of recognition in NHS funding of the Island factor, for example.

However, he added this dislocation was made worse by the cost of getting to and from the mainland. Some £100 million a year is spent by islanders on some of the most expensive ferry routes in the world.

He told the debate the ferry companies were privatised in the 1980s with no public service obligation in “a significant and pretty unique error”.

“There appears to be no desire to rectify that situation, yet elsewhere, public money tends to get thrown at locations with isolation issues,” Bob said.

Bob also said the fair funding formula was due to be implemented in 2021 and reminded the minister that a previous Secretary of State has said the costs associated with being an Island “would be given due consideration…as part of the fair funding review”.

“Will the Minister indicate whether he thinks there is a case for island status being taken into account in the fair funding formula?” he asked.

He also mentioned the Island does not qualify for the rural services delivery grant, because that grant’s funding basis does not recognise the isolation of being an island.

He then said: “Please, do not get me wrong, we love being an island, having that wonderful identity and a different festival every weekend, and being a fantastic place that people come to, with our wonderful quality of life. This is not some special pleading, but when Government write the rules they do not seem to take the Island into account.”

In response, Rishi Sunak said the provisional local government finance settlement earmarks £132 million for the Isle of Wight in 2019-20, up from £127 million in 2015-16, representing a 4% cash increase overall, which is double the national average, plus the new ability to keep all it business rates in a pilot scheme, which would also raise extra money to be spent on the Island

“It is right that we recognise the specific situation of the Isle of Wight and our other islands in many areas of policy, and not just fiscal policy,” he told the debate.

He said that his Housing, Communities and Local Government department would look at the Bob’s case and the University of Portsmouth study and he urged the council to submit relevant evidence.

He also said he would meet with Bob, the university and the council to discuss the study findings in more detail.

“This will not be analysis for analysis’ sake,” the minister said.

“He (Bob) highlights this issue at a once-in-a-generation time when there is a possibility to do something about it. That is because my Department is embarking on a fair funding review. I reiterate the Secretary of State’s commitment to undertake a thorough, evidence-based review that uses the most up-to-date information available to assess both current and future resources and needs of local authorities.

“The idiosyncratic island factors we heard about today that drive specific costs are exactly what we need to hear about and consider in formulating a new funding formula.”