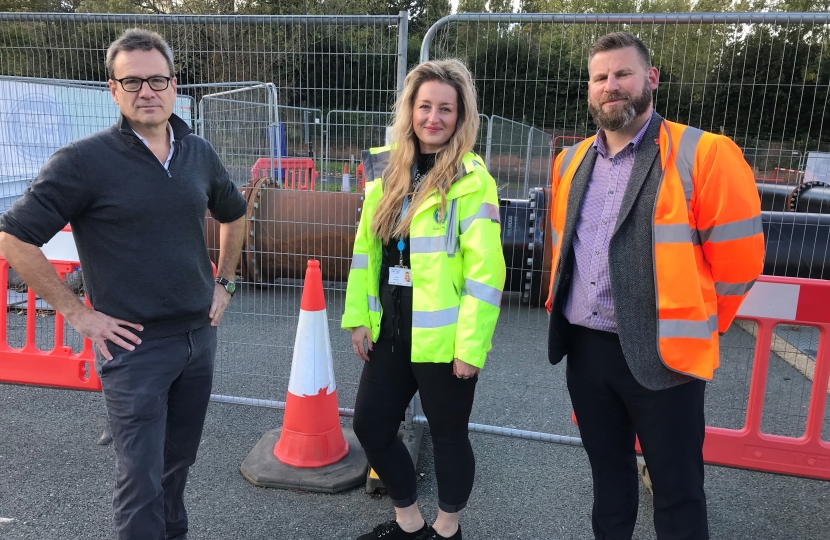 Island MP Bob Seely met with Southern Water representatives this week to learn more about the current status of the works at Appley seafront.

At the start of the year, a sinkhole appeared on the seafront when part of a sewer collapsed which led to complex repair works being undertaken by Southern Water. While the initial repair is complete, Southern Water said further investigations showed the need to line additional sections of the sewer in order to ensure that another collapse doesn’t occur.

On Monday (1 November) Mr Seely stopped off at Appley to receive an update on the ongoing works.

He said: “Although the repair at Appley is taking a long time, it’s good to see progress is being made and investment being put into the Island’s infrastructure.

“I know this has inconvenienced many Ryde residents and businesses, but I’m told Southern Water is expecting the work to be complete by early 2022.”

Mr Seely also spoke briefly with Southern Water about stormwater discharges into the Solent and the progress with the Environment Bill, which MPs will discuss again next week.

He said: “As regards sewage and storm overflow, I and others will be speaking to Ministers this week. The Government knows that it needs to move on this issue, and water firms know that they need to make significant improvements, not only on sewage but other issues that affect river and marine pollution, such as pollutants from agriculture.

“Next Monday, I am expecting the Government to come forward with plans to enshrine a legal duty to reduce storm and sewage overflows, as part of the ground-breaking Environment Bill.”