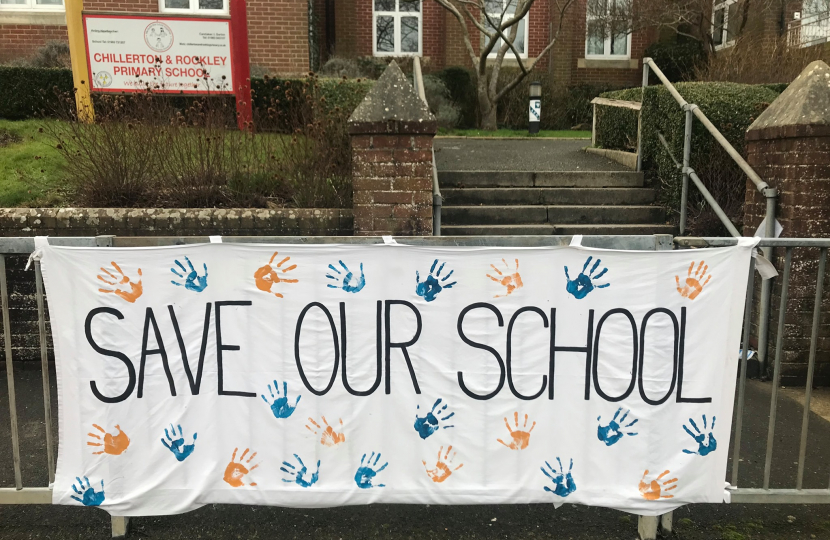 MP Bob Seely has praised the hard work and determination of a campaign group that fought against the closure of Chillerton and Rookley Primary School.

Last year Mr Seely joined campaigners in objecting to proposals to amalgamate Chillerton & Rookley Primary School with Godshill Primary School, arguing that closing the school due to short-term issues was short-sighted. Mr Seely suggested that the school should be given time to turn things around before a permanent decision was made.

In a letter to former Isle of Wight Council Cabinet Member for Education, Paul Brading, last year Mr Seely said: “I would ask you to consider if the school can be turned around with a support package in place to help it achieve this to allow it to continue to serve the community for years to come.

“With investment and support, it could be possible to make the school viable again and protect this asset for the community it serves.”

Following the news announced this week by the incumbent Cabinet Member for Education, Cllr Debbie Andre, who confirmed Chillerton and Rookley Primary School will remain open, Mr Seely has praised campaigners who fought against closure.

He said: “I’m really pleased to hear that Chillerton and Rookley Primary School has been saved from closure.

“I was very happy to support the campaign group who fought so hard to save the school and I praise their efforts for continuing the fight when it seemed the odds were against them.

Mr Seely said he hoped the decision would lead to a brighter future for the school.

“This has been a successful school in the past and, with investment and support, I believe it can continue to serve the community for years to come.

“I hope this decision gives parents the confidence to enrol their children at the school so that it can begin to thrive again.

“I look forward to hearing more about the plans to make the school viable again and I hope we won’t find ourselves in a position where we are debating this school’s future again anytime soon.”