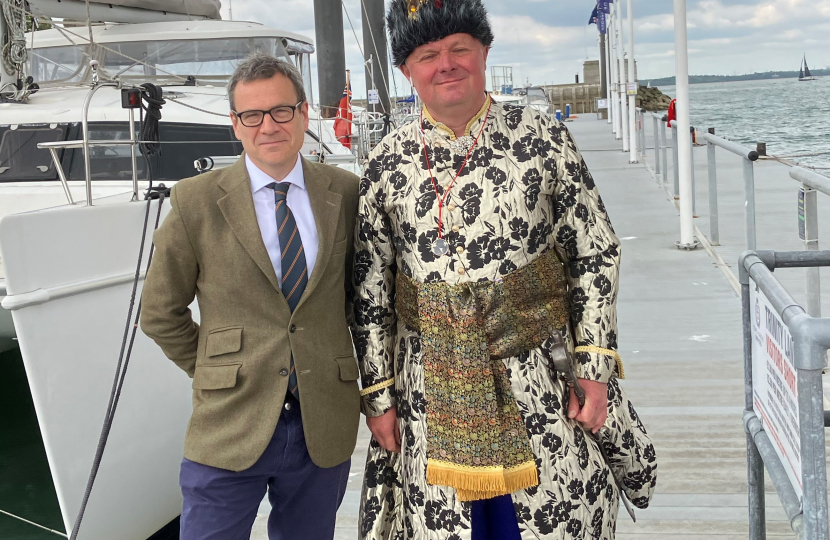 Each year Cowes pays tribute to the Blyskawica crew whose efforts in May 1942 prevented much greater damage and loss of life.

And 80 years on while Poland and the UK again join forces to resist aggression – this time by the Russians in Ukraine – Bob said a series of weekend events to mark the heroism of the Blyskawica carried an additional resonance.

Events to mark the 80th anniversary included a short remembrance ceremony at Francki Place with the main anniversary commemorations at the Bandstand on Cowes Parade with the Polish warship ORP Wodnik anchored off Cowes to mark the occasion and hosting a reception for dignitaries onboard. Eva Maria Doroszkowska, the granddaughter of the Blyskawica Captain Wojciech Francki, was also present during the commemoration.

Bob said: “The recent terrible events in Ukraine remind us of the importance of our strong bonds of alliance with Poland – now, just as 80 years ago, our countries are united in standing up to an aggressor.

“What also strikes me about the events of 1942 is how the towns of Cowes and East Cowes have sought to preserve the importance of the Blyskawica’s actions and to keep alive the firm friendship that was born as a result.

“I must pay tribute to the Cowes and East Cowes communities - and of course the Friends of the ORP Blyskawica Society – for their dedication to keeping local history and the spirit of international co-operation alive.

"I was honoured to meet with the Polish Ambassador and naval officers from the warship ORP Wodnik.”

Mr Seely thanked all those involved in coordinating the weekend’s events.

"I would like to thank the former Mayor of Cowes and co-founder of the Friends of ORP Blyskawica Society, Geoff Banks, for his tireless work in maintaining links between Cowes and Poland and all others who helped to make the commemoration a success, including Cllr John Nicholson.”

Geoff Banks, Chairman of the Friends of the ORP Blyskawica Society, said: “The commemorations were a tremendous success and paid the rightful and respectful tribute to the actions of the captain and crew of ORP Blyskawica on that fateful night of 4/5th May 1942.

“The Friends of the ORP Blyskawica Society will continue to annually commemorate not only those brave actions of ORP Blyskawica but pay homage to those seventy innocent souls who so tragically lost their lives in that blitz.”

Councillor John Nicholson led the Cowes Blitz Walk from the War Memorial at Northwood House down through the town to the mass grave at Northwood Cemetery to meet with Polish delegates to mark the rededication of the memorial and the part that the ORP Blyskawica played.

He said: “I was pleased to lead the walk through the town to mark this important and poignant anniversary.

“I’m pleased to say that the walk was very well attended with one hundred booklets given out and people joining along the route. It was great to see so many people taking an interest in marking the occasion.”