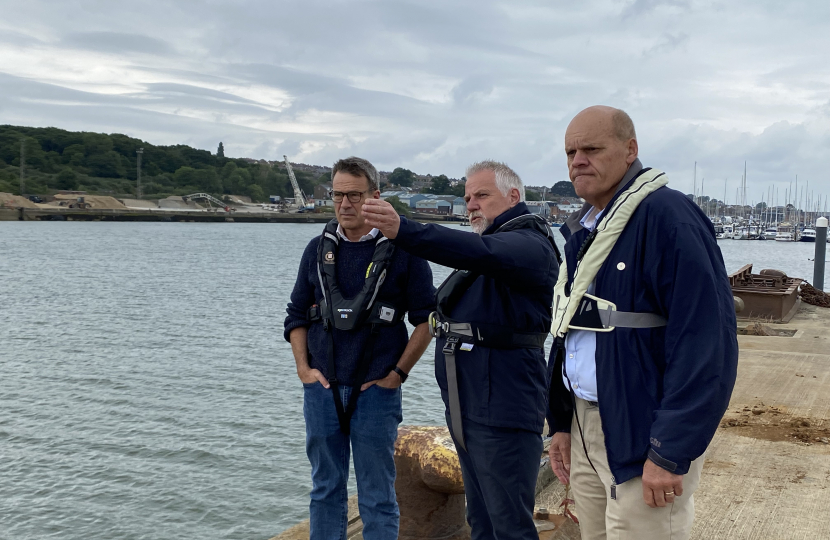 The plans include the potential for adding a new cruise ship mooring, developing yacht repair facilities at Kingston Wharf, investigating the viability of installing electric charging facilities for vessels and using greener fuels.

Mr Seely, who was recently taken on a tour of Kingston Wharf by CHC to hear more about the plans, said he felt optimistic about the future opportunities for employment in the town and said he hoped the investment could also be the catalyst to see the derelict site at Harrisons Yard being used for the public good.

Gary Hall, CEO of Cowes Harbour Commission said: “I was delighted to welcome Bob and to share our plans for the continued development of Cowes Harbour which we believe will benefit Cowes for generations to come.

“We recently published our Five-Year Strategic Plan and discussed with Bob some of our key objectives including the development of Kingston in East Cowes to increase capacity and to develop the site for marine commercial use.

“Working closely with Visit IW, we’re also actively promoting Cowes and the Island to the expedition cruise industry to encourage more cruise ships to include Cowes in their itineraries.”

Mr Hall said the green fuel studies will help Cowes Harbour Commission to reduce its carbon footprint, while the electric charging units will enable Cowes Harbour to cater for the growing number of people that are buying an electric boat.

Mr Seely said: “Cowes Harbour Commission is being ambitious with its vision for Cowes and I’m very happy to support them in any way I can.

“Over the last few years, I have worked hard, with others, to secure a brighter future for Cowes and East Cowes.  The plan has always been to encourage regeneration and create jobs to improve prosperity and a deliver better future for Islanders – Cowes Harbour Commission’s strategy is in lockstep with that thinking.

“In East Cowes, working with the then council, we fought hard to purchase the Columbine building in order to secure the future of shipbuilding at the site.”

Bob said great strides had been made recently in boosting the maritime industry in Cowes and East Cowes. These included persuading ministers to release £6 million of levelling up money to fund a new, heavy lift crane, improve the iconic Columbine building for shipbuilding, renovate the neighbouring Victorian barracks and create a new public square along East Cowes Esplanade.

“Government investment and an increasing number of jobs means the future is looking bright on both sides of the river. Creating jobs and opportunities for Islanders is what I am focused on.”