Bob welcomes new measures and laws to protect animals and the environment. 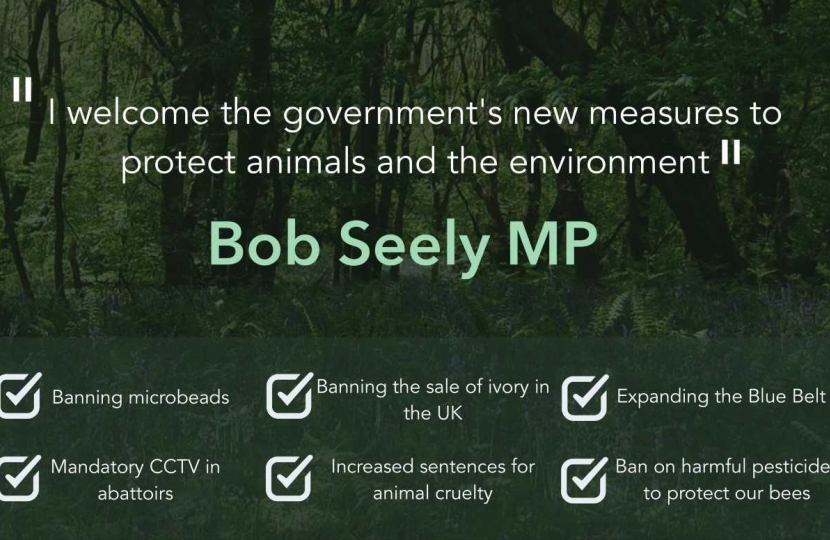 New measures and laws to protect animals and the environment, such as CCTV in abattoirs, have been welcomed by Island MP Bob Seely.

The Government is set to make the surveillance mandatory to ensure animals are not abused or mistreated when they go for slaughter, and it is also banning the trade in ivory, which puts the lives of African elephants in danger.

In addition, ministers will legislate to increase the sentence for the worst acts of animal cruelty to five years' imprisonment – a move that will offer some of the strongest punishments for this type of offence anywhere in the world.

Puppy farming and the cruel trade in pets reared in unacceptable conditions will be looked at closely.

A review of the practice of exporting live animals for slaughter is part of post-Brexit plans and the Government wants to restrict and possibly end the trade. Food imports will also have to meet the highest welfare standards.

“These measures and new legislation are really tough and show the Government is committed to animal welfare both here at home and abroad after we leave the EU,” said Bob.

“It comes on the back of proposals to ban microbeads in cosmetic products by next summer to help the fight against plastic litter in our seas that is harming marine life and getting into our food chain.

“The Government has also pledged to ensure the principle that animals are sentient beings, capable of feeling pain and pleasure, is embedded more clearly than ever before in UK law as we leave the EU.

“This was always the case, despite misleading recent reports, and strengthened UK law will ensure that we have higher welfare standards than the EU.”