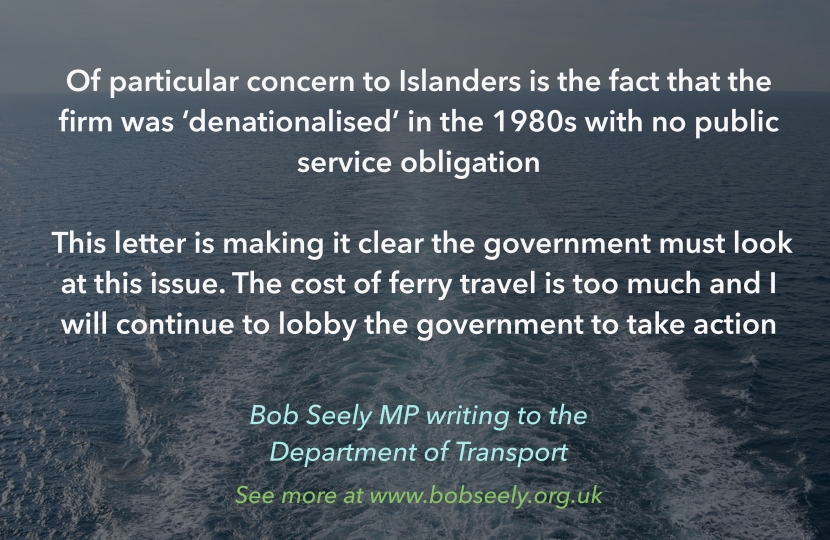 Bob has written to the government asking it seven questions about the Island’s ferry companies including whether ministers would consider a buy-out of either Wightlink or Red Funnel.

Bob wrote to transport minister Nusrat Ghani this month and said Island residents were receiving “iniquitous treatment” compared to other UK Islands on travel costs and the companies were effectively a duopoly.

Bob has previously called for a public service obligation to be imposed on the ferry companies to lower the cost of travel and pointed out Scottish island travel is subsidised.

“Of particular concern to Islanders is the fact that the firm was ‘denationalised’ in the 1980s with no public service obligation, in stark contrast to the regulated, franchised arrangements subsequently put in place for the railways,” Bob said in the letter.

“Many of my constituents believe this to be a considerable mistake. The Island has suffered since by having some of the most expensive ferries (per mile) in the world.

“Even with some modest discounts occasionally offered by the ferry firms in some instances, this adds to operational costs for businesses and damages our visitor economy.”

Bob said the letter was reflecting a widely-held view that the Island is getting a bad deal on ferry travel and he wants ministers to act.

“This letter is making it clear the government must look at this issue and answer these questions on behalf of Islanders. The cost of ferry travel is too much and I will continue to lobby the government to take action,” he added.

The seven questions to the minister are:

1. Do you believe that it is appropriate that the Isle of Wight continues to have some of the world’s most expensive ferries?

2. Do you understand the concerns of my residents that one of their only means of taking a vehicle on and off the Island was privatised without any sort of service obligation to those who rely on it?

4. Do you believe it is acceptable for a ‘lifeline’ service to be structured in a purely commercial manner that results in the obligations to private shareholders always taking a higher priority than those of users?

5. Is the Government willing to consider imposing a Public Service Obligation in the event of a sale of Wightlink?

6. Can you explain to my constituents and myself what Government’s powers are to impose such a Public Service Obligation if it requires primary or secondary legislation, and, if so, would you be prepared to consider it either during Government time or through a Bill I introduce?

7. Would the Government support a public buy-out, by local or national Government, of one of the ferry companies?