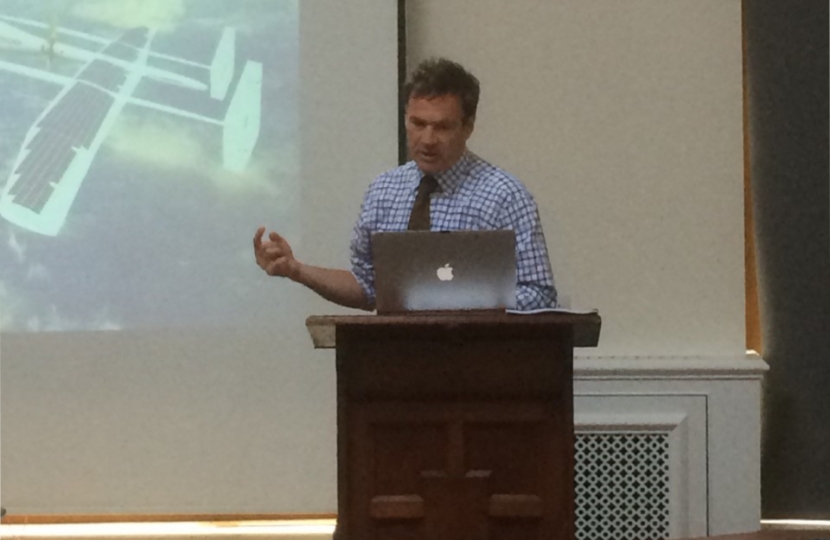 MP Bob Seely has told a regeneration conference he will campaign against large-scale house building to stop the Island from becoming a suburb of Portsmouth of Southampton.

Instead he called for a more sensitive land use, and for an approach that prioritised investment in Island people, through offering education and training, and embracing the knowledge economy.

Speaking at the one-day event organised by Councillor Michael Lilley Bob said: “Regeneration is sometimes a code word for greenfield land use, and sadly at the moment, is it a euphemism for house-building.

“Too often, and whatever the question, the answer from Government is house building, but house building has not made us more prosperous as an Island, and indeed may well have made us poorer.”

Bob said a different approach was needed. He congratulated the Council on its decision to develop a regeneration team, and said their future work was vital for the Island.

“We need a jobs agenda, not a house-building agenda. We need to keep people on the Island" he said. "We are a small Island, we don’t have the land to have large-scale house-building without significant damage to tourism, but also our quality of life.

Bob added that the Island needed a higher education campus to allow young people to stay and to attract others to the Island and its unique way of life. It also needed to attract more high-tech industries, the knowledge economy businesses that relied on broadband, not land, to be successful.

He told the event at the Riverside Centre on Friday there were two options to “build, build, build” and become Portsmouth of Southampton or the Island becomes more sensitive and innovative about land use and develops green space sparingly while reusing land more effectively.

Bob thanked Cllr Lilley for organising the conference and said he looked forward to working with groups from across the Island.

He added he would support all house building on the Island as affordable and for Islanders as part of a different approach and one that could be a role model for other areas, but it was important the economic fundamentals were also right.

Tourism will remain vitally important and any regeneration agenda needs to look at the visitor experience, not just numbers, he explained. There is scope to build on eco-tourism with more cycle routes and better sensitivity to the environment, he told the conference.