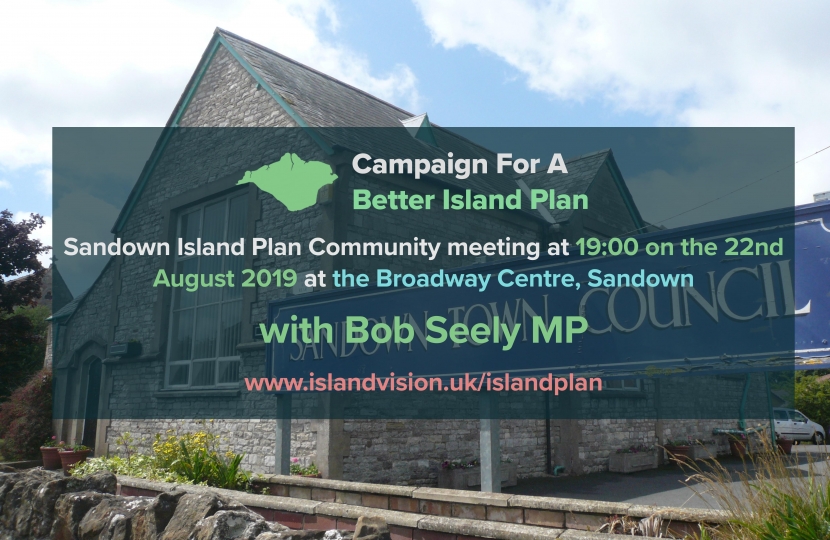 Over 5,000 Islanders have now taken part in MP Bob Seely’s survey and petition on Island Plan proposals to build thousands of houses - many on greenfield sites - on the Isle of Wight over the next 15 years.

“Thank you to Islanders of all ages who have taken the time to express a view. It’s important than as many Islanders as possible let me know what they think,” said Bob. “The more we make our voices heard the better. I am asking all Islanders to take part in the survey.”

As of Monday at 10am, 5,320 had either logged onto: http://islandvision.uk/Islandplan/ to express an opinion or had signed a paper version. The overwhelming majority of Islanders who have responded have opposed the plans and support Bob’s campaign.

Island MP Bob is continuing his tour of the Island to raise awareness of the Island Planning Strategy - the so-called Island Plan - with more meetings planned.  In the next month, Bob plans to meet with residents in Sandown, Newport and Rookley to highlight the volume of houses planned to be built in their areas.

He has already met with over 500 residents across the Island in Wellow, Bembridge, Brading, East Cowes, Ryde, Seaview and Nettlestone.  “The meetings I have held so far have been well attended,” he said.

“It’s clear from the residents I’ve spoken with that many of us are concerned about the volume and type of housing being planned for the Island. We need one-and two-bed homes for Islanders young and old. Developers want to build three and four bed. And most of the affordable homes aren’t even affordable.

“The plan proposes 9,600 new homes be built over the next 15 years across the Island, many on greenfield sites. This is too much.

Bob’s next meeting takes place on 22 August at the Broadway Centre in Sandown.

He encourages residents to attend to hear more about housing plans for the Island and share their views.

Alternatively, residents can write to the MP with their concerns or their local councillor.

Bob is encouraging residents to sign his petition and raise concerns with their local councillor. The survey and petition against the housing targets can be found here: http://islandvision.uk/Islandplan/