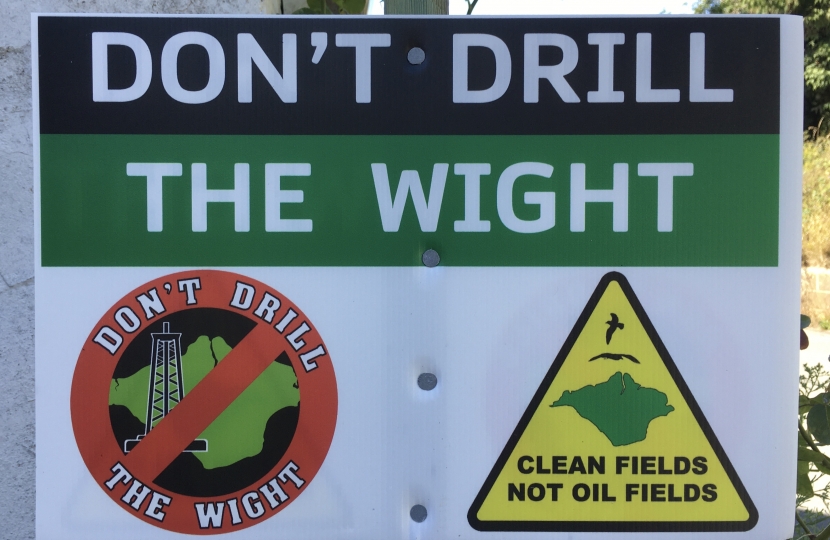 MP Bob Seely has lodged further opposition to plans by UK Oil and Gas PLC for a new drilling site in Arreton.

The company is seeking permission for two boreholes, but Mr Seely believes approval would be harmful to the Island’s existing ecology and could also compromise future applications for further environmental designations.

The applicant needs both planning permission and an environmental permit in order to operate. The Isle of Wight Council is still assessing the planning application and comments made during the formal consultation period that ended in February.

He said: “I am deeply concerned about the environmental impacts arising from this proposal. Not only does the proposed site sit on undeveloped greenfield farmland, it is very close to a Site of Special Scientific Interest and the boundary of the Isle of Wight AONB.

“The application is entirely contrary to the high environmental standards we are trying to uphold here. We have 41 sites of special scientific interest, 395 local wildlife sites and we seek to secure a sustainable future, preserving the Island’s biosphere status and aiming for net-zero by 2050.

“Islanders will be aware that I am calling for the area of AONB on the Island to be extended, and for the Island to become an Island Park, to take into account the Island’s landscape as a whole.

“Our environment has been both nationally and internationally recognised for the variety of landscape, wildlife and level of access available across the Island. We do not want to see that tarnished.”

Mr Seely also expressed concerns about the condition the site would be left in at the end of the three-year activity, once the permit elapses, and the impact of artificial lighting on wildlife, as well as noise and air pollution.

He said: “In terms of light pollution, the Island is one of the few areas in England with truly Dark Skies, and if we want to be designated a Dark Sky Park then we need to consider applications such as this.”

Mr Seely said he is concerned that site traffic would add to existing road congestion and also be detrimental to the environment. He also raised safety concerns.

In his response he said: “You will be aware that industry accidents are a low likelihood, but high magnitude event possible on the site. I am confident the Island context should be taken into account in this regard, and I urge the Environment Agency to consider the unique environmental pressures that the Island faces; the ability of the Island to respond to such incidents; and the challenges of monitoring and assessing the environmental impact of the site in terms of the Island’s fragility as a whole.”

Mr Seely added: “My thanks go to all those who have worked hard to raise awareness and oppose this application including local councillor Cllr Suzie Ellis, Arreton Parish Council and local campaign group ‘Don’t Drill the Wight’.

"I hope that the Environment Agency not only understands the strength of feeling from Islanders on this issue but also agrees that this application is harmful to our environment and everything we are working so hard to protect here.”