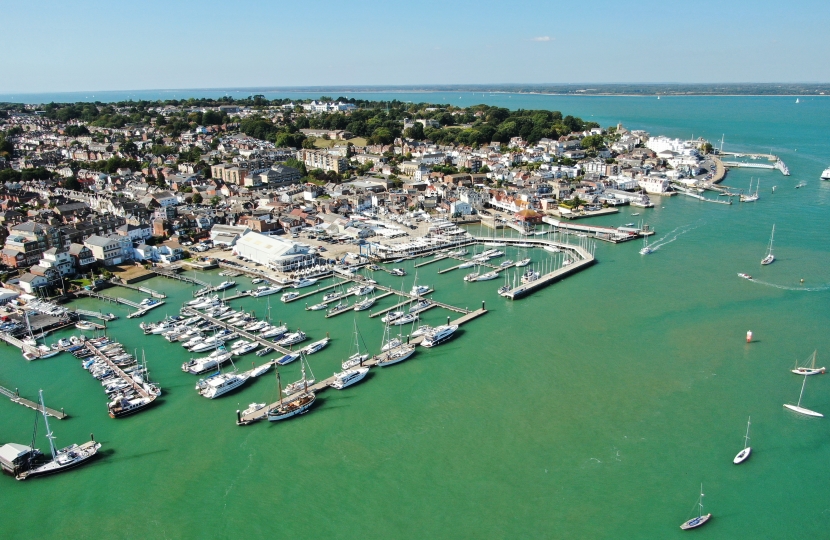 Proposals to create a single organisation dedicated to ensuring Cowes continues to be the destination of choice for yachting and events by combining Cowes Harbour Commission (CHC) and Cowes Town Waterfront Trust (CTWT) have received the support of MP Bob Seely.

A public consultation was launched last week on a vision to bring Cowes Harbour Commission and Cowes Town Waterfront Trust together with the aim of developing and improving Cowes as a gateway harbour to the Isle of Wight, a centre for leisure sailing and events, and a visitor destination.

Mr Seely said: “I was very interested to learn about the exciting new proposals for Cowes and the public consultation by CHC and CTWT to combine into one charitable harbour trust, which would work in partnership with local groups and the community to maintain and build on Cowes’ reputation as the destination of choice for tourists and recreational boaters.

“However, I do want to make sure that these proposals have wide community support, and therefore I have asked that CHC and the waterside trust discuss fully their proposals with reps from the CBA and the town council and councillors to make sure that as many people are informed, and have the chance to have their say.

“This joint vision which could maximise the potential of the Cowes leisure waterfront, including improving access, enjoyment and use of the waterfront, has been talked about for many years and links to one of my key goals for the Island, which is to improve our visitor offer and develop high-quality tourism across the Island.

“The proposals from CHC and CTWT to work with the local community and business could be key to assisting the future prosperity of the local and High Street economy, which is so reliant on visitors and the yachting and boating customers.

“I have offered to work where I can to assist both harbour organisations in taking forward their proposals for Cowes waterfront and with their important communications with the local community and also, if helpful, with other organisations and authorities.”

Further information about the proposals for Cowes Harbour and the stakeholder consultation can be found here: