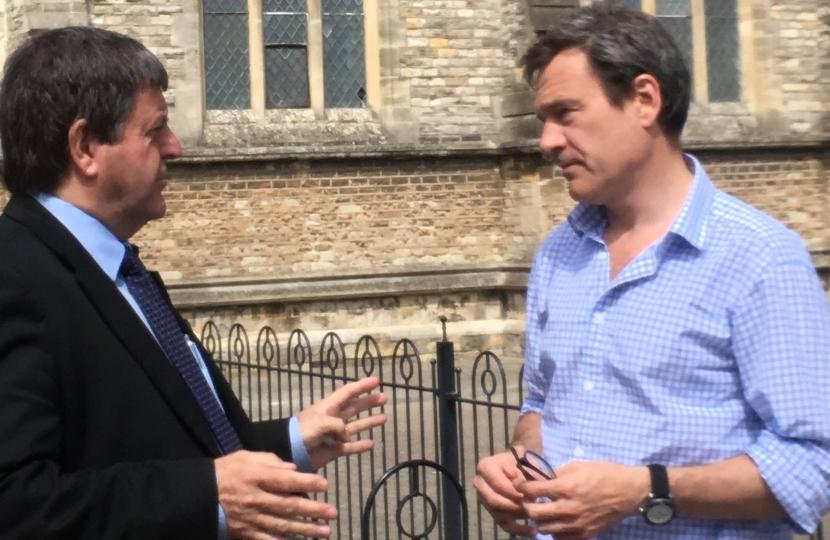 The Conservative parliamentary candidates for the two English constituencies with major islands have teamed up, making a joint commitment to look at common issues.

Derek Thomas (the re-standing MP for the St Ives constituency (which includes the Isles of Scilly)) and Bob Seely (the new Conservative candidate for the Isle of Wight seat) are making a pledge to jointly establish an All-Party Parliamentary Group (APPG) for UK Islands if elected on 8th June.

The two constituencies are unique in England in having islands with their own local authorities – the Council of the Isles of Scilly and the Isle of Wight Council respectively – and both face comparable issues in terms of ferry services and on-island infrastructure, as well as the need to balance economic development and growth with protecting the natural beauty and distinctiveness of their local areas.

APPGs are informal cross-party groups which bring together Members of the Commons and the Lords to look at issues of common interest, often undertaking their own research and analysis, before submitting recommendations to Government.

The proposed APPG for UK Islands would bring together MPs representing major islands within Great Britain and Northern Ireland, along with Peers who have an interest in these communities. One of its key objectives would be to look at the arrangements for transport provision to and from the various island communities – and explore whether the model of regulated and subsidised services for a number of Scottish islands should be replicated for their English counterparts. There would also be a focus on the heightened cost of providing public services in island communities.

Bob Seely (who currently serves as an Isle of Wight councillor) said: “Even though there are APPGs for the Channel Islands, the Isle of Man and a range of island-based countries around the world, there is no similar provision for islands with the UK’s own waters. This has to change. We need to give UK island communities a collective voice in Parliament, and establishing this group would be the first step to doing that.

“We need a better deal for the Island. I hope that this group will be an important step towards achieving that aim.

“Both Derek and I recognise that our respective island communities need a new funding settlement to meet the additional costs associated with being physically detached from mainland Britain. Together – and through this group – we can join forces to make that case to the next Conservative Government.”

Derek Thomas added: “Having represented the Isles of Scilly in the Commons for the past two years, it has become apparent that our island communities need to join forces to fight for a better deal from government. The islands are an important part of my constituency, and whilst we have secured some essential investment – such as a £1m grant to support the upgrading of financial and IT systems on the Isles of Scilly – there is much more still to do.

“With the Council of the Isles of Scilly and the Isle of Wight Council having just started new four-year terms, we look forward to working with the leadership of both local authorities to support the establishment of this group, and making our case to government ministers. As islands, we have to work together to ensure the voice of communities such as ours is heard at the heart of Westminster and Whitehall.”

Subject to the outcome of the election on 8th June, Bob and Derek intend to start working on the establishment of the APPG for UK Islands the following week, inviting MPs and Peers to join them in getting the group up and running.

They would welcome any feedback from residents in their respective island communities about what issues the APPG should be focusing on.