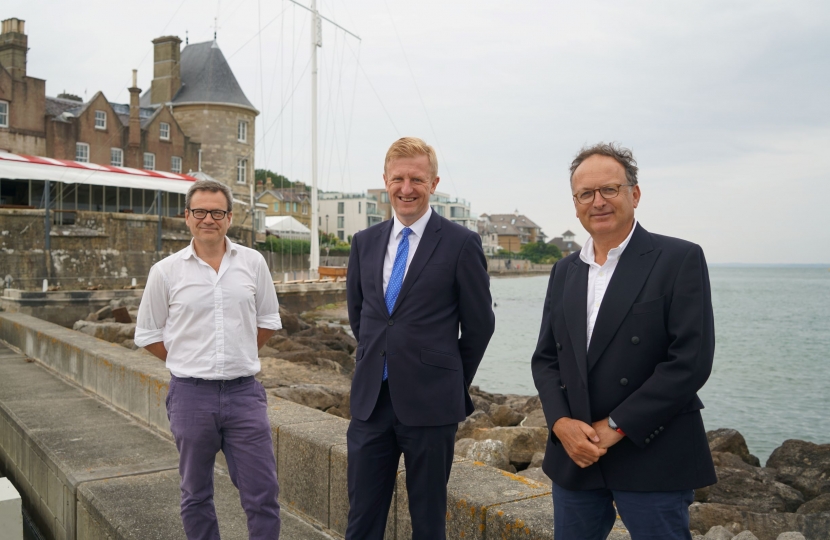 The Secretary of State for Digital, Culture, Media and Sport, Oliver Dowden, visited the Isle of Wight yesterday (Thursday 24 June).

Mr Dowden’s visit took him to Cowes for a round-table meeting to hear about progress with the rollout of ultrafast broadband on the Island and plans to develop a 5G hotspot in Cowes. He also heard about the Isle of Wight’s desire to bring the 37th America’s Cup to the Solent, as well as the importance of arts, culture and tourism to the Island’s economy.

A boat trip down the River Medina followed, with a quick stop off at Vestas - where the latest technology in wind turbine power is designed and exported.

Mr Dowden also visited Tapnell Farm on his return to hear about how the business had diversified and grown in recent years.

During the visit Island MP Bob Seely briefed Mr Dowden on his plans to grow arts and culture on the Island and explained how vital Government support had been, and would continue to be, to Island businesses and the events industry.

Bob briefed the Secretary of State on the work of Venture South, the Island’s cultural investment company. Its initiatives include the creation and support of The Island Collection – a collaboration between the organisations that run the Islands arts and heritage venues, such as Ventnor Exchange, Quay arts and others, as well as Film Wight – the Island’s first official film office. Other projects are underway such as the building of a film studio on the Island to further enhance the Island’s offer to the film, TV, gaming and advertising industry.

Speaking after the visit, Island MP Bob Seely said: “I’m delighted that the Secretary of State took time out of his busy schedule to visit the Isle of Wight.

“We wanted not only to highlight the importance of the Island to the UK visitor economy but also to explain the impact Covid has had on tourism-dependent businesses here.

“We were able to share with the Secretary of State how money from the Department of Culture, Media and Sport is being spent on the Island with the rollout of rural broadband, the development of a 5G hotspot in Cowes and we fed back how important Culture Recovery Funds had been to Island arts businesses.

“I would like to thank everyone who helped to make this visit a success."