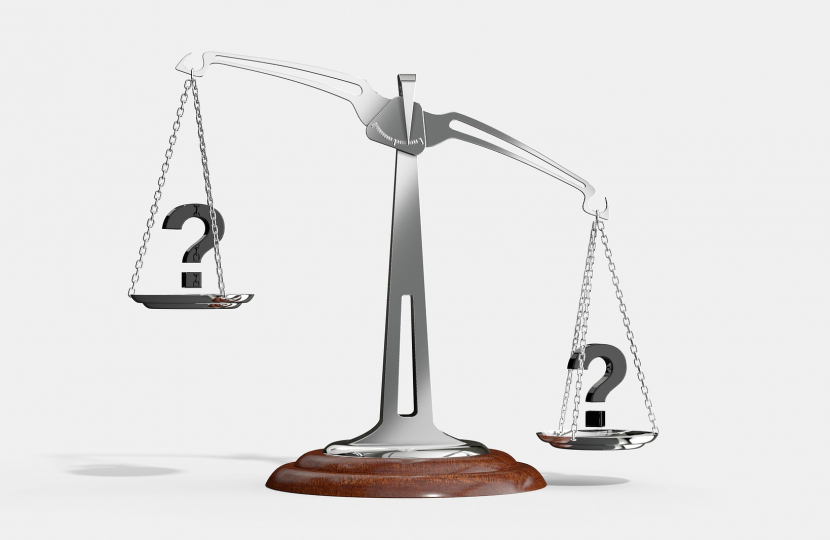 Following debates in the House of Commons yesterday (Wednesday), Bob Seely is providing a further explanation of the background and process for securing additional funding for public services on the Isle of Wight. He said:

“Prior to my election as the Island’s MP, I served as a member of the Isle of Wight Council. It was evident from my time at County Hall that the Island’s funding settlement from Whitehall was insufficient, not least because it failed to take account of the additional costs associated with providing public services in an island community.

“This is something that I was committed to rectifying from when I was first elected to represent the Isle of Wight in Westminster.

“It is important to emphasise that securing additional funding for the Island is a process, not an event. The allocation of funding to local authorities has to take place through the consistent and transparent application of criteria, based on evidence of needs and requirements. As the PM’s spokesman rightly said yesterday, money for local areas is decided in a process run by civil servants.

“However, it is Ministers to decide the overall policy framework in which these funding allocations are made. It is in relation to the criteria which applies that I have made representations to Ministers, and will continue to do so. It is the role of a constituency MP to fight for the specific needs of their constituency, and – as I said yesterday – I make no apology for doing so. I will use each and every opportunity that arises to seek to make the Island’s case. And yes, I did seek reassurances in this regard prior to supporting the Prime Minister in the vote earlier this week. I make no apology for doing that either.

“The first step in the journey to getting better funding for the Isle of Wight was to secure an explicit recognition that communities such as ours faced additional cost pressures. Following representations made by myself and the Isle of Wight Council, the then DCLG’s review of relative needs and resources – as part of the Fair Funding Review – stated in December 2017 that:

‘Some local authorities will face unique cost pressures related to their geography; such as the costs associated with providing services on an island, or to a widely dispersed population in rural areas. The Government will therefore consider how the Area Cost Adjustment could be updated and improved to better reflect these sources of differences in costs.’

“A year later, following further representations, a further review in December 2018 explicitly referred to the Isle of Wight:

‘The Isle of Wight is a uniquely isolated and remote authority as it is only possible to reach a major town or city from households on the island via a ferry journey. The Government therefore considers it necessary to take account of the additional time taken by ferry transport in any measure of remoteness, including the time taken on board the ferry and at embarkation and disembarkation.’

“This was the first time the Isle of Wight Council’s unique circumstances were explicitly acknowledged in the consideration of local government finance. This had not occurred under previous Labour or Conservative-led Governments.

“The Fair Funding Review, by its very nature, is a complex and sensitive process – as there will be both winners and losers out of any change to how funding to local authorities is distributed. As such, the Government has been taking a comprehensive approach to this process, including looking at transitional measures. Sadly, this process has been far slower than I would have liked it to be, but I recognise the importance of getting it right so that any adjustments are fully evidence-based and therefore defendable. I am not looking for a quick fix of just an extra amount of money for the Island; I want to see a fully justified – and long overdue – adjustment to the Isle of Wight Council’s local government finance settlement from Whitehall. That has been the basis of all my representations.

“I have done all I can to encourage the Government to speed this process up. Therefore, when the Prime Minister stood for the leadership of the Conservative Party in 2019, I specifically pressed him on this matter on the occasion of his visit to the Island, and subsequently in the House of Commons. He recognised our circumstances and said:

‘I think it’s right that given what we have, for instance in some of the Scottish Islands, that we should look at doing something like that for people living on the Isle of Wight as well.’

“Following the election of a majority Conservative Government in December 2019, the Fair Funding Review was due to be progressed. As a House of Commons Library paper in February 2020 acknowledged, it was due to take effect in April 2021.

“However, in April 2020, the then Secretary of State for Housing, Communities & Local Government published a statement announcing that the implementation of the Review of Relative Needs and Resources (i.e. the Fair Funding Review) was being suspended because neither the government nor councils had the capacity or financial certainty (due to the coronavirus pandemic) to engage properly with the reforms at that time. This was understandable given the unprecedented circumstances we faced at the time, as reflected in the substantial financial support the Government made available to local authorities and communities across the country.

“Despite the ongoing impact of the pandemic, I was pleased, following pressure from me, that MHCLG announced in February 2021 that £50,000 was being allocated to the Isle of Wight ‘to review the challenges face by the council, residents and businesses on the island who are separated from the mainland’. This work is now complete, and has been shared in draft form with MHCLG to inform its Fair Funding Review deliberations.

“As the Leader of the Isle of Wight Council has acknowledged in her report to next week’s meeting of the Corporate Scrutiny Committee, ‘an additional £1m was provided in the Annual Funding Settlement [for 2022-23] with a commitment from senior Government Ministers to continue working with us to understand the evidence base around the Isle of Wight’s costs ahead of the 23-24 settlement’.

“I am grateful to the Alliance administration at County Hall – along with senior officers – for their efforts in continuing to work with me in making the case to Government Ministers. As the Leader rightly points out, this is about the ‘evidence base’. We (the Isle of Wight) have the evidence to justify an uplift in the Government’s funding settlement for the Isle of Wight Council, and it is important that this is now recognised as the Fair Funding Review draws to a conclusion.

“I fully recognise that people are impatient at wanting to see this matter resolved. No-one is more impatient than me, as reflected in what I outlined in the House of Commons yesterday. But any decision to award additional funding to the Isle of Wight Council must be fully justified and part of a wider local government settlement for England as a whole. Contrary to the pathetic and pitiful claims made by the senior Labour MP, Lisa Nandy, in the House of Commons - which she was forced to withdraw - this is not about anything improper, but instead about our fight to secure what is right and fair. I will never apologise for prioritising the Island.

“What may have been lost on MPs like Lisa Nandy is that, under the last Labour Government, councils such as ours on the Isle of Wight had needs-based funding removed from them to be reallocated to metropolitan boroughs such as hers in Wigan, under a process called ‘damping’.

“In 2008, for example, the Isle of Wight Council indicated that £11.658m of local government grant (over three years) had been taken away from it. As a report to that year’s budget meeting set out, ‘this represents resources that are rightly due to the Island based on the government’s formulae but are taken away to help fund other councils who would otherwise lose more grant if the formulae was rigorously applied’.

“This was a conscious decision by the then Labour Government to take money away from local authorities such as the Isle of Wight Council and redistribute elsewhere, despite the evidence showing that we were entitled to such funding. Such decisions had a direct impact on the availability of funds for public services on the Island, and despite representations made to Ministers at the time, the Government refused to give the Isle of Wight Council the funding to which it was entitled.

“The irony of this situation is one where a Labour Government was making decisions contrary to evidence-based assessed need. I am now seeking the opposite from the current Conservative Government – for the Isle of Wight Council to receive funding which takes full account of the additional costs associated with providing public services in an island community, based on evidence. This is the right and proper thing to do, and I am delighted that we now – for the first time – have an explicit recognition of these additional cost pressures as part of the Fair Funding Review process.

“Working with the Isle of Wight Council, we are now entirely focused on seeing this recognition translate into the evidence-based funding allocations which the Island deserves. We have been waiting decades for these issues to be addressed; so we can cope with a few more months as the pandemic-delayed Fair Funding Review comes to a conclusion. I look forward to working with others towards this outcome.”