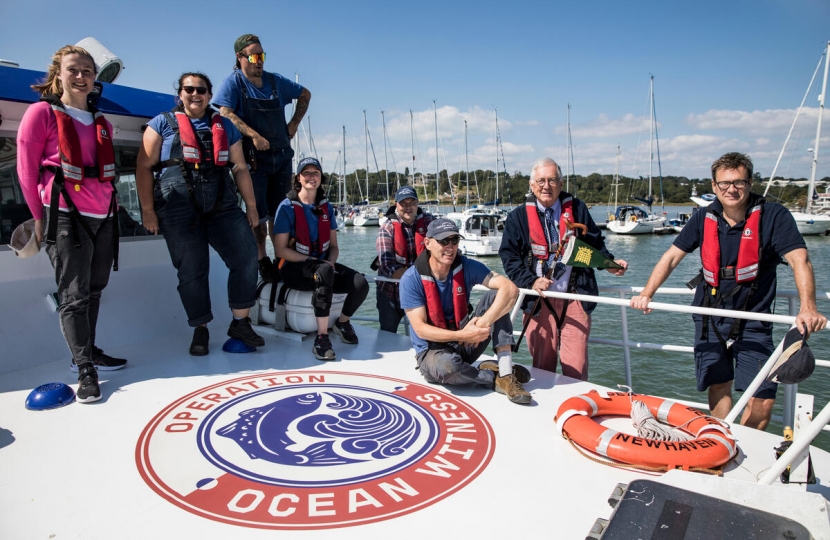 Bob Seely, MP for the Isle of Wight, and Sir Peter Bottomley, MP for Worthing West and Father of the House of Commons, this week met with a member of the coastal fishing community and campaigners from Greenpeace at sea. They discussed the threats facing the seas off the south coast of England and the importance of strengthening marine protection to protect nature and boost local coastal communities.

The meeting took place on Greenpeace’s newest boat, Sea Beaver, which took the group sailing around the waters to the east of the Isle of Wight. During the outing, they discussed the threats posed by supertrawlers, bottom trawlers and industrial fly-shooters, and how these destructive industrial forms of fishing have harmed the UK’s fishing communities.

Fishers were promised that Brexit would help revive the UK’s struggling coastal communities, and provide the UK with a unique opportunity to implement world leading marine protection standards. While the Government has used its new Brexit powers to ban the destructive fishing method of electric pulse trawling from UK waters, supertrawlers, bottom trawlers and fly-shooters are still allowed to fish in most offshore Marine Protected Areas without restrictions.

Greenpeace research found that supertrawlers, which are more than 100-metres long and each capable of catching and carrying thousands of tonnes of fish, spent 5,590 hours in 19 of the UK’s marine protected areas in the first six months of 2020 alone. As a result, fish stocks in inshore waters have been severely depleted and local fishers have been struggling to make ends meet.

Sir Peter Bottomley, MP for Worthing West and Father of the House of Commons, said: “I am grateful to the Greenpeace crew for his opportunity to learn more about the need for enforced effective rules to ban unsustainable fishing.

“It was a pleasure to meet the working fisherman from Newhaven, who explained why ‘fly-shooting’, super trawling and techniques that destructively scour the sea bed combine to ruin the marine ecosystem while ending the opportunities for appropriate catches of mature fish.

“The Greenpeace ‘Operation Ocean Witness’ helps detect inappropriate or illegal fishing. We should all be grateful.”

Bob Seely, MP for the Isle of Wight, said: “This campaign is an important one. The Government’s Fisheries Bill has meant that we can take some important steps to develop a Fisheries Policy which is right for the UK.

“That includes supporting and growing our fishing industry as well as protecting fish stocks and the marine environment.

“I think Greenpeace are right to be highlighting the dangers of industrial trawlers and illegal fishing and I will be working to press the government to take further steps on this important issue.

“When industrial trawlers hoover up, in a space of only a few hours, significant fish stocks as well as damaging the long-term health of the marine environment, they destroy inshore fishing along the south coast. I’ll be working with other MPs along the south to make sure the government is listening, as I’m sure it will be.”

Rebecca Newsom, Head of Politics at Greenpeace UK, said: “As coastal MPs, Sir Peter Bottomley and Bob Seely have first hand experience of the challenges local fishers face when it comes to the threat of destructive industrial fishing in our seas. It was a pleasure to discuss these issues together on our boat. Ocean protection and thriving coastal communities go hand in hand, so it’s vital the Government seize this opportunity. We have agreed to work together to push for urgent action.”

The meeting took place as part of Greenpeace’s Operation Ocean Witness, a six month project to document, expose and confront the destructive fishing practices taking place inside the protected areas off the south coast.

Greenpeace investigators have witnessed extensive bottom trawling in protected areas set up to protect the seabed, high intensity fly shooting, as well as AIS dark fishing, when boats turn off their satellite tracking systems, which is illegal under UK and international maritime law.

Greenpeace is calling for bottom trawlers, supertrawlers and fly shooters all to be banned from the UK’s marine protected areas. This would help to revive the UK’s fishing communities, protect biodiversity and help keep blue carbon stores buried safely in the deep oceans.

The Government has committed to conserving and protecting at least 30 percent of our seas by 2030, in line with scientific advice. It has new powers in the 2020 Fisheries Act to act on this promise through banning destructive industrial fishing from all offshore Marine Protected Areas.