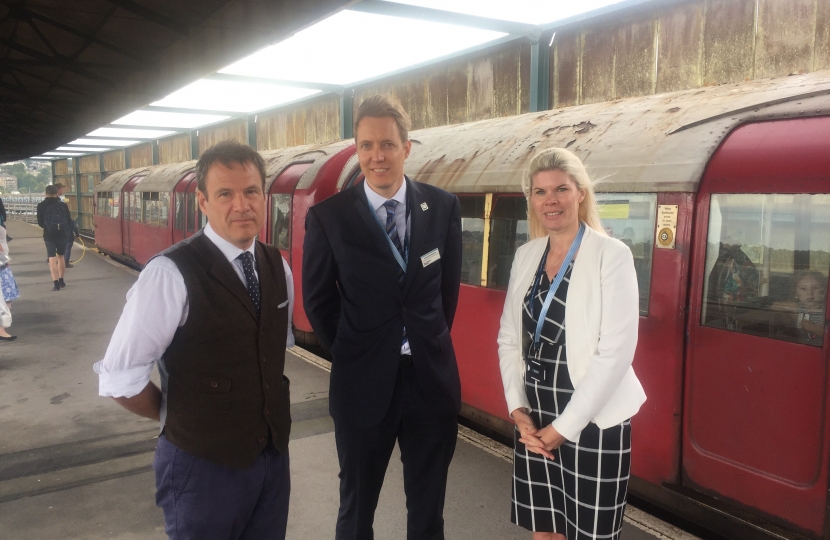 He met with senior managers Joost Noordewier and Emma Wiles at Ryde Pier Head this week to talk about the new operator's plans for much-needed investment in Island Line.

The new operator has pledged to consult on the future of Island Line in the coming weeks, setting out a range of options for rolling stock and infrastructure with the ultimate aim of submitting plans to the Government.

Speaking after the meeting, Bob said:

“I was pleased to meet with SWR on the Island to talk with them about the scale of improvement needed. We have suffered from significant underinvestment in the Island’s rail service for many years.

“Island Line is a popular train service, and it's essential that we now work with the new franchisee, the Isle of Wight Council, the Community Rail Partnership and other key stakeholders to ensure the best possible plans are put forward that makes it fully fit-for-purpose. This includes securing more modern rolling stock, a half-hourly service, station improvements and better promotion of the route.

“The Pier itself is in need of serious infrastructure work to ensure the long-term continuation of train services to and from the Esplanade. Network Rail will be a key partner in delivering this upgrade, and I look forward to receiving details of their current review of the state of the Pier, and the work needed."

“Island Line is an important part of the South Western Railway network, and we have already taken steps to increase its profile as part of our offering – including the promotion of the Isle of Wight as a destination in its own right.

“When we put forward our bid for the franchise, we set out our commitment to working with Islanders and their local representatives to develop a viable future for the Island Line and put it on a more sustainable footing. As the local MP, Bob will play an important part – alongside the Isle of Wight Council and other interested parties – in helping shape our future plans and hopefully supporting our proposals when they are submitted to the Government next year.

“Our consultation on the future of Island Line will begin in the coming weeks, setting out a range of options to stakeholders for rolling stock and infrastructure. We hope to secure strong community backing for our plans, and to submit our plans to the Department for Transport with this support.”