Bob Seely urges Government to invest in rail services on the Island and in Southern England. 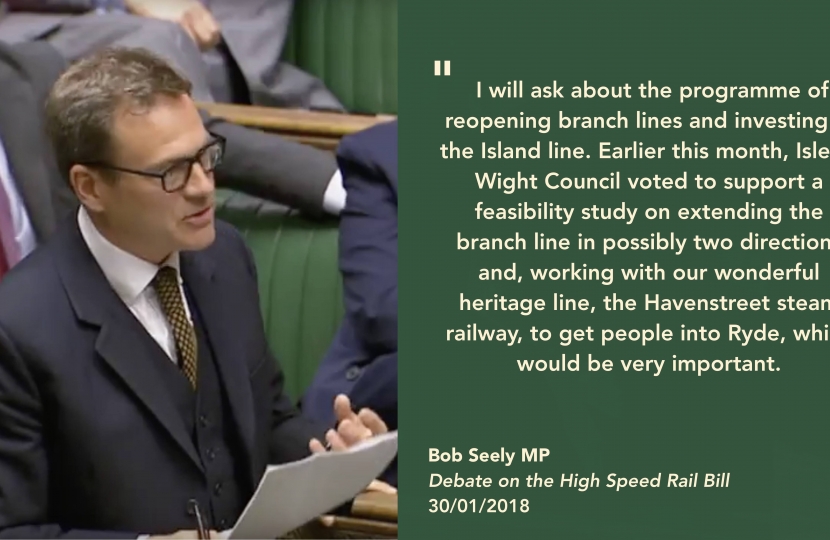 MP Bob Seely has questioned the Government in Parliament on the cost benefits of HS2 and urged it to invest in rail services on the Island and Southern England.

Speaking the Commons yesterday, Bob also asked ministers to find money for a feasibility study to look at extending the Island Line into Newport and on to Ventnor and said he will write to the Department for Transport asking for more Island and Southern England investment.

Bob said HS2 was “extraordinarily expensive” at £52 billion with poor returns, and by the Government’s own admission it has a cost benefit ratio of 1:2.3 which he described as “poor”.

“HS2 does nothing for capacity for southern rail or for south-west rail,” he told MPs. “The south-west rail network is crying out for investment. We need rail flyovers at Woking and at Basingstoke to get more services on that line. We need to update the signalling system between Waterloo and Woking, and eventually elsewhere on the line, to improve speeds and services. We need infrastructure on the Portsmouth line, to increase capacity. Getting from London to Portsmouth, you travel at an average speed of around 45 miles an hour, and the idea that we are spending billions building a rail network to go superfast up north when we are still travelling at branch-line speeds on mainline routes in the south of England is very galling to very many constituents in constituencies across southern England.”

He then asked the Government to commit to prioritising the necessary work on the south-west rail route that could speed up journey times between London and south coast destinations such as Portsmouth, Southampton, Bournemouth and the Isle of Wight.

Bob then told Parliament he wants money for the Island and the letter would spell out what is needed.

“My letter will cover support for investment, support for a feasibility study, and, dependent on the results of that study, support for the branch line and capital work on Ryde Pier Head to ensure that the railway line there stays feasible, continues and has a future,” he said.

He then asked the minister Nus Ghani: “Will the Minister assure me that the Department will not be telling me that a feasibility study is not possible because of cost? Will the Minister assure me that if a feasibility study recommends extension of our lines, that will be supported, given that the costs involved, £10 million to £30 million, are margins of error in Government accounting in the Department of Transport?

“Will the Minister assure me that there will be support for infrastructure projects both for the South Western Railway network and the Island line, notwithstanding the considerable amounts of money that are been spent elsewhere?”