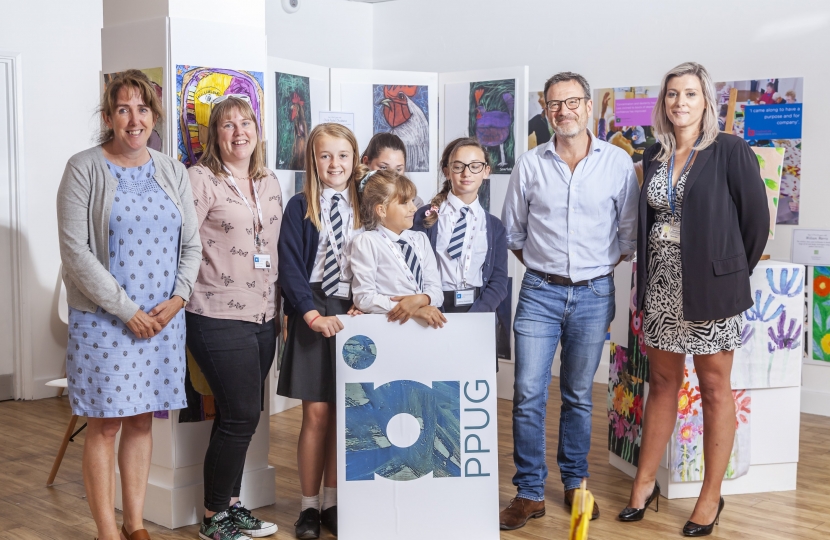 MP Bob Seely, who is working to raise the profile of the arts on the Island, was impressed by artwork produced by children from Nine Acres Primary School which was showcased at the ‘Be creARTive’ exhibition in Newport last week (July 19).

Bob said: “The students produced a wonderful display of fantastic artwork that they should be really proud of. I was particularly impressed with the chalk pastel chickens and Picasso-inspired faces. Bryony Mackrill at Nine Acres is clearly an inspirational Art Teacher.

“Art is so important in raising aspirations and enriching life and is a great way to get children learning in a different way.

“I’m so pleased that the Arts Council England have now agreed to give the Island priority status so that our many arts and culture groups have easier access to funds to help them grow. Independent Arts are doing a fantastic job in providing access to exciting and stimulating creative activities for Islanders.”

Hannah Griffiths, Independent Arts Project Manager, said: "The Nine Acres Exhibition has been a brilliant blast of colour in the gallery. It has given the children the chance to not only show their work, but some were given the chance to be gallery assistants and show visitors around including their MP Bob Seely.

“This exhibition has brought a whole new audience to PPUG with over 400 visitors seeing the exhibition over its three-week run."

Nine Acres Head Teacher Beth Dyer said: “It was wonderful that our local MP could come and see the work produced by the children of Nine Acres. It was a real privilege for the children to have their work on display and be recognised by the community. We had some great feedback from the MP which gave the children such a boost.

“Thank you to Independent Arts for giving the children of Nine Acres this amazing opportunity”.