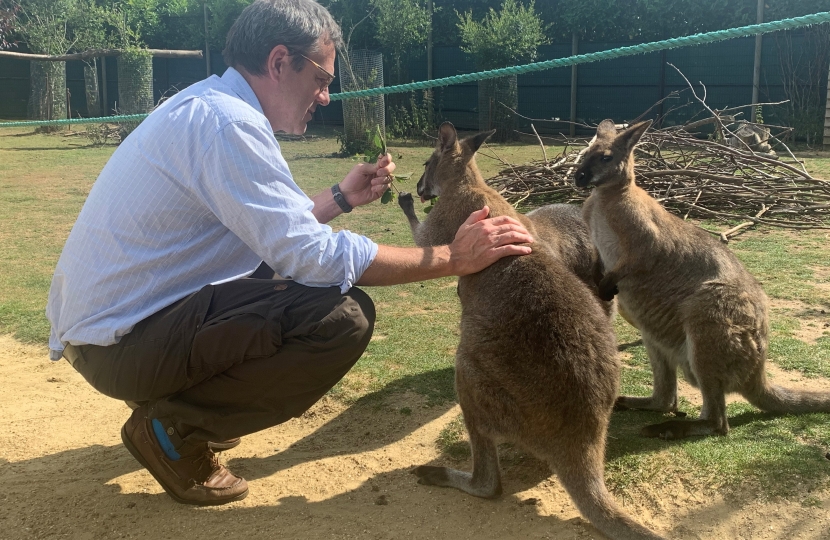 MP Bob Seely is seeking support for Amazon World Zoo Park which is yet to be able to reopen its doors to the public as the restrictions associated with the Covid-19 virus continue.

Although many zoos were able to reopen from 15 June, this only applied to outdoor animal attractions. As Amazon World has 50 per cent of its attraction indoors - due to the large tropical rainforest exhibits - it remains closed for the time being with most of the staff furloughed.

During a recent visit to Amazon World Bob met with Zoo Manager, Rob Westby, to discuss what could be done to support the attraction - which houses over 1000 animals and costs around £1,000 per day to run.

Mr Westby said: “This truly is the year of the long winter. We invested in a soft play area to generate income through the winter, but we are coming out of winter with a considerable overdraft.

“We have taken advantage of the business grant and the zoo support fund that has paid for animal feed, care and heating, but it still leaves us with a financial headache.

“If we are able to open for August, we will only get two months of tourism which would not, even on a good year, get our overdraft down.”

Bob, who mentioned Amazon World and other Isle of Wight animal attractions during a parliamentary debate on 11 June, said: “While the Government’s announcement to reopen outdoor animal attractions is welcome, there is much more to be done.

“Attractions, such as Amazon World, rely on visitors and the associated income to keep going and continue the valuable breeding, conservation and education work they do.

“They are facing an uphill battle to get over the financial impact of Covid-19 and I am looking at all avenues of support that they may be able to access.”

Bob said he would do all he could to support Island businesses in need of help and was particularly focussed on those missing out on tourism-related income through the summer season.

Anyone wishing to make a donation to support Amazon World can do so here.

Following his recent victory to persuade the Government to scrap the controversial algorithm that dictated the scale and location of housebuilding on the Isle of Wight, MP Bob Seely has taken further steps to protect the Island’s green fields from development by asking the Government for further